Will we ever learn? An Artist residency at the Hungarian Multicultural Center Pierre Leichner 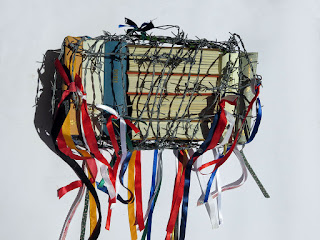 I Just finished a 3 weeks art residency in Budapest. We lived and worked in Buda, the older section of Budapest, also the hilliest, which was welcome as it, was cooler and quieter then Pest the touristic and commercial center of the city. Our hostess and artist Beata Szechy was very welcoming and took us and the other artist Pamela Paulsrud to several openings and even to visit Lake Balaton on a weekend. As expected we ate well and drank pálinka daily. And it is true fresh Hungarian paprika is superior. Our flat was spacious and we shared several enjoyable meals in the evenings. Also great was the newly constructed pool and fitness gym near by where we took classes and swam most days in the morning. Making art was more of a challenge for mixed media artists as there was little equipment except for paints and space. So Pamela and I had to spend our first few days finding books and getting basic equipment to work with. Early on I had decided to focus on the territorial protectionism that was gripping Europe in response to the migrants from North Africa and also the promise of building border walls by the Republicans in the United States. Hungary was one of the first to take a hard line and build up their border with barbed wire. On the way here on the plane I read an article that much of this wire was made by prisoners in Hungarian jails and that some of it was also sold to other countries. I can understand Hungarian protectionism as they are a country that has suffered repeated occupations and atrocities in the last hundred years but the nature of migration has changed. The old conventions that were established for refugees following wars no longer work easily in a world where people migrate to escape poverty as well as political oppression.  My parents having been refugees with me as an infant and later immigrants I have little sympathy for those who forget that North and South American nations were born from occupation that we would call today illegal invasion and the suppression and genocide of the indigenous populations. Also much of European and North American economies have survived by   organized immigration and willful blindness to cheap illegal labor migrants. Having said this I also recognize that the process should be controlled, out of fairness to the migrants as well as the hosts. Will we learn …in time…that the earth does not belong to us- anywhere! -but that we belong to the earth?
So I bought a roll of barbed wire a bag of plaster, a used world atlas and several used travel guidebooks of European countries, and meters of ribbons in the color of those countries flags. With these materials I made 3 works.
Europe 2016 is composed of 9 European countries travel guidebooks transpierced and bound in barbed wire. Colorful ribbons matching their flag colors hang from the wire. 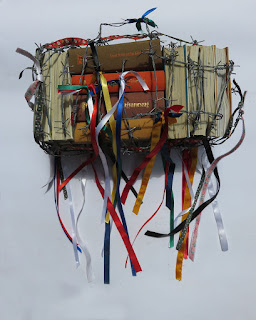 For  Ket ocean kozott (between two oceans in Hungarian) I built an wall like enclosure for the travel guide book  of the United States in which I carved out the Grand Canyon – the iconic great divide shaped by time and  nature. 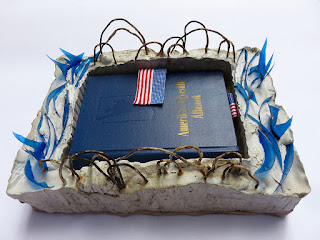 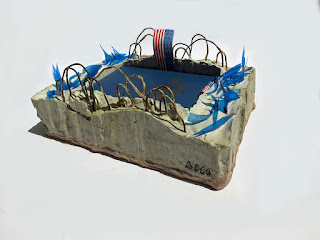 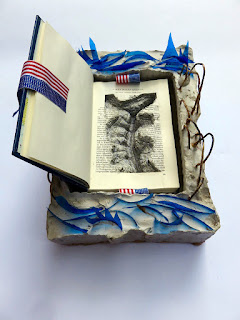 Lastly out of the pages of the world atlas I recreated a globe as it might look in 2216. I shrunk our land mass and covered it mostly with ocean. The globe is wrapped in barbed wire and ribbons hang from it arranged in a haphazard manner. 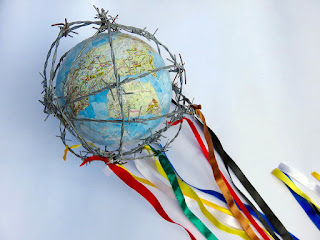 How many forts will have to be built and found in ruins until we accept their futility?
Our host is arranging for the pieces to be in an upcoming exhibition in August.
Sources : Pierre LEICHNER